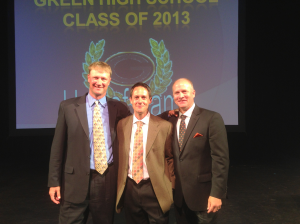 Mark made the move to track at a early age leaving behind little league baseball and football he was drawn to track where he ran 5:27 mile in his first attempt and the rest his history. By the time Mark reached his junior year at Green he was a top runner in Ohio. Winning his first state championship in cross country that fall he went on to win both the 1600 and 3200 at Ohio State Track Championships his senior year.

Mark became an Ohio State Buckeye where he moved to the Steeplechase. After a coaching change that Mark credits as a big difference in his career he finished ninth in the NCAA Cross Country Championships. With this turning point Mark went on to win his first NCAA steeplechase championship and later that year would win both the NCAA and USA Outdoor Track Championships.

Mark would eventually qualify for three USA Olympic and four USA steeplechase
championships. His personal best of 8:09.76 is #3 all time U.S. He owns five of the seven fastest times ever run by an American. You could argue he is the best steeplechaser the U.S ever had.

Mark is a 1991 graduate of Ohio State in finance and marketing and is currently the head cross country and assistant track coach at Kent State University. He resides in Wadsworth, Ohio with his wife Kimberly and three sons, Cameron, Griffin and Grayson. 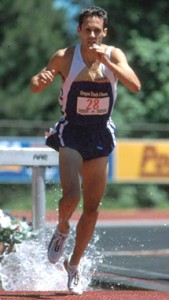